Yesterday, I was unable to post because of the varsity basketball game I went to to support my school. I hoped in my last entry that my school would dominate the game and that it would go by fast, so that I could get home in time to post. They did win, but it was not as much domination as I had hoped. It was a one-sided game, and my school won by more than 20 points. However, there were more fouls in this game than in any high school basketball game I’ve ever seen. Therefore, I didn’t arrive home until late. It was a fun time though, and I’m glad I went.

Yesterday, there was again no real baseball news, aside from the minor signing of Gary Matthews Jr. and resigning of Shane Victorino. The most interesting news of yesterday involved a young prospect who has been quickly moving up the ranks in the O 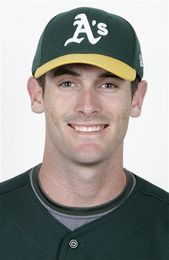 akland Athletics’ farm system: Grant Desme. Desme had a phenomenal season in Class A ball, hitting 31 homeruns and stealing 40 bases. He also received the MVP award in the Arizona Fall League, and was awaiting his expected invite to spring training with the A’s. However, unknown to the public or the A’s organization, Desme had been considering a higher calling for some time. Yesterday, he announced that he would be leaving baseball to become a priest. Desme had always been a very religious person, and thanks God for his success in baseball this past year. When he contacted A’s GM Billy Beane, he expected Beane to be shocked and disappointed. Surprisingly, Beane’s reaction was, “great” and he was very understanding of the decision, according to Desme. Desme also said:

“I thought, I’m doing well in baseball, but I really had to get down to the bottom of things — what was good in my life, what I wanted to do with my life. And I felt that while baseball is a good thing and I love playing, I thought it was selfish of me to be doing that when I really felt that God was calling me more, which took me awhile in my life to really trust and open up to it and aim full steam toward Him.”

While I am not a very religious person, I can see the motivation for Desme’s decision. Imagine that you are very religious and have strong faith in God from a young age. You are slowed by injuries many times in your career, and finally you have a breakout season. During the season, you struggle to dismiss feelings of wanting to pursue something more religious, to thank God for this great blessing. This is Desme’s story, and it’s an interesting one. One interesting fact is that Desme viewed the many injuries of his career as a message from God to pursue something “more important” than baseball. He says of this:

“My injuries, I would say, would be the biggest blessing God’s ever given me,” he said. “For my entire life, baseball’s been my life. I define myself as a baseball player, and when it was taken away from me, it was an eye-opener. It was a real shock that it could end. I realized that even if I played in the big leagues, it was still going to end, or it could end anytime you step on the field with an injury. I really started doing some soul searching of who I was and who I wanted to be, and this is where that’s led me.”

There have been mixed responses about Desme’s decision, including some that I found in the comment section on this article on MLB.com:

-“He should give his signing bonus or a large chunk of it back. That would be the Christian thing to do.”

-“I really need to tip my hat to this young man. I guess I am too selfish in my thinking, but if my beliefs were as strong as his I would play the game for a few years and the money I earned I would donate to the poor. The priesthood will always be there when he is done and age isn’t part of the equation. Baseball on the other hand has such a small window of opportunity.”

-If he wanted to do good things with his life, staying in baseball and being a role model would have been the smartest thing. The priesthood?? Organized religion is more corrupt than baseball. He threw away a change to REALLY make a difference in the world. Nice job.

I don’t have a very strong opinion on this news, but I do think that Desme is admirable for pursuing something that he finds important, and leaving another one of his great passions in order to do this. He has decided to follow his real dream, and that is something we are taught to respect from a young age. I can see why people would be annoyed by this, because he is a young man leaving baseball by choice, a game that so many of us would be overjoyed to be given the chance to play professionally. I do respect Desme’s decision, and I wish him the best in his new life.